As I struggled to make the decision regarding the best thing to do for Ellie, the thing that kept coming back to my mind was how it would affect the other animals. We have a tight-knit little zoo here and having a member of the menagerie missing was sure to be difficult on the other critters.

Smokey is the one I worried about the most. He slept with (or on) Ellie every night. The first day after she was gone, Smokey walked around the house obviously looking for her. The second day I noticed him walking around, too. His focus seemed to change after just a couple of days. Instead of looking for her, he seemed to be figuring out what he would do without her. He tested the waters with Jake, but Jake doesn’t snuggle with anyone but me. Smokey has turned to Mark for comfort and companionship. He’s always been such an aloof cat with us, always preferring Ellie’s company to ours. Whenever we’d pick him up he’d tolerate it for a moment or two, but then he’d squirm out of our arms. I wondered if he’d ever snuggle with a person.

This is where he’s been for the past few days: 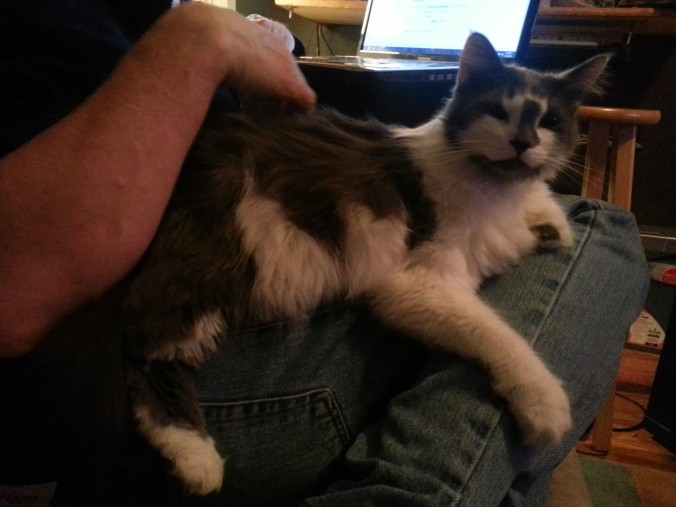 He has been Mark’s shadow as much as Jake has been my shadow.

And Jake has definitely become my shadow. I can tell that he misses her. He cries when I first get home from work each day. He used to get excited to see me but this is different. It’s like he’s had nobody to “talk” to all day so when I get home he’s got a ton to say. 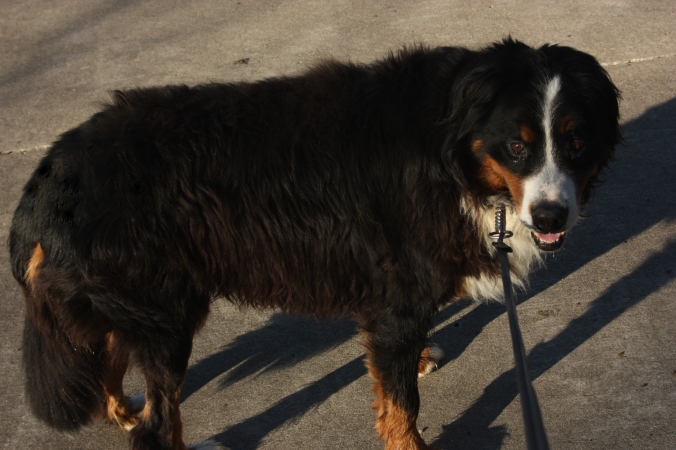 He has been enjoying our walks, even though he can’t take it as long as he used to be able to.

Tippy has been getting used to Ellie not being around for quite awhile since she really hasn’t been outside much, and Tippy will NOT come in the house because I have those other little asshole cats hanging around. I’ve been letting Jake be outside in the mornings while I get ready for work and when I look out the window Tippy is always right there with him. They’ve all managed to find their way through this tough time.

The only one who doesn’t seem to have been phased by Ellie’s passing is Bandit. She’s never been one to just hang with Ellie like Smokey does. Bandit wants to be with me and Mark. She’s constantly on one or the other of us. So for her, it’s been an easy transition.

As tough as it is to lose a pet, we are all doing well. Seeing the other animals finding their way through their own grieving stage has helped me. So…we’re good.

4 thoughts on “When You’re The Best Of Friends”

Looking For Something Specific?

Our family is made of four boys and two girls. They make life interesting, busy, crazy, wild, and just the way we like it!

I have no idea what I'm doing